“I think it’s a crime that more teachers and jazz professionals don’t take adult amateurs and semi-pro musicians in their communities more seriously. These adult students are some of the most dedicated, passionate musicians I’ve ever worked with, so I started Jazz Wire to be the home for these musicians. A place to meet each other and connect, a place to get great, actionable information, and a place for some serious fun.”

Jazz is about coming together. It’s about messy and imperfect human beings involved in a democratic exchange of ideas. It’s about history and shared history. Jazz is caring about others, while also not being afraid to stand up and say your piece. It’s about guts and compassion and maybe even a little humor. And what do all of these things have in common? They don’t work well when you are alone. They require others, they require friends, they require a team. Jazz is a team sport, so it isn’t very much fun, alone in your basement or apartment.

The Jazz Wire mission is to create this all-important connection between passionate musicians around the globe. Notice that we chose the word “passionate,” as opposed to “expert” or “those with perfect technique.” We don’t really care about all of that. We care about working with musicians who are passionate. Jazz Wire is here to take passionate adult musicians, connect them with each other in a real, vibrant way, and then get us all moving down the road to our goals and dreams. 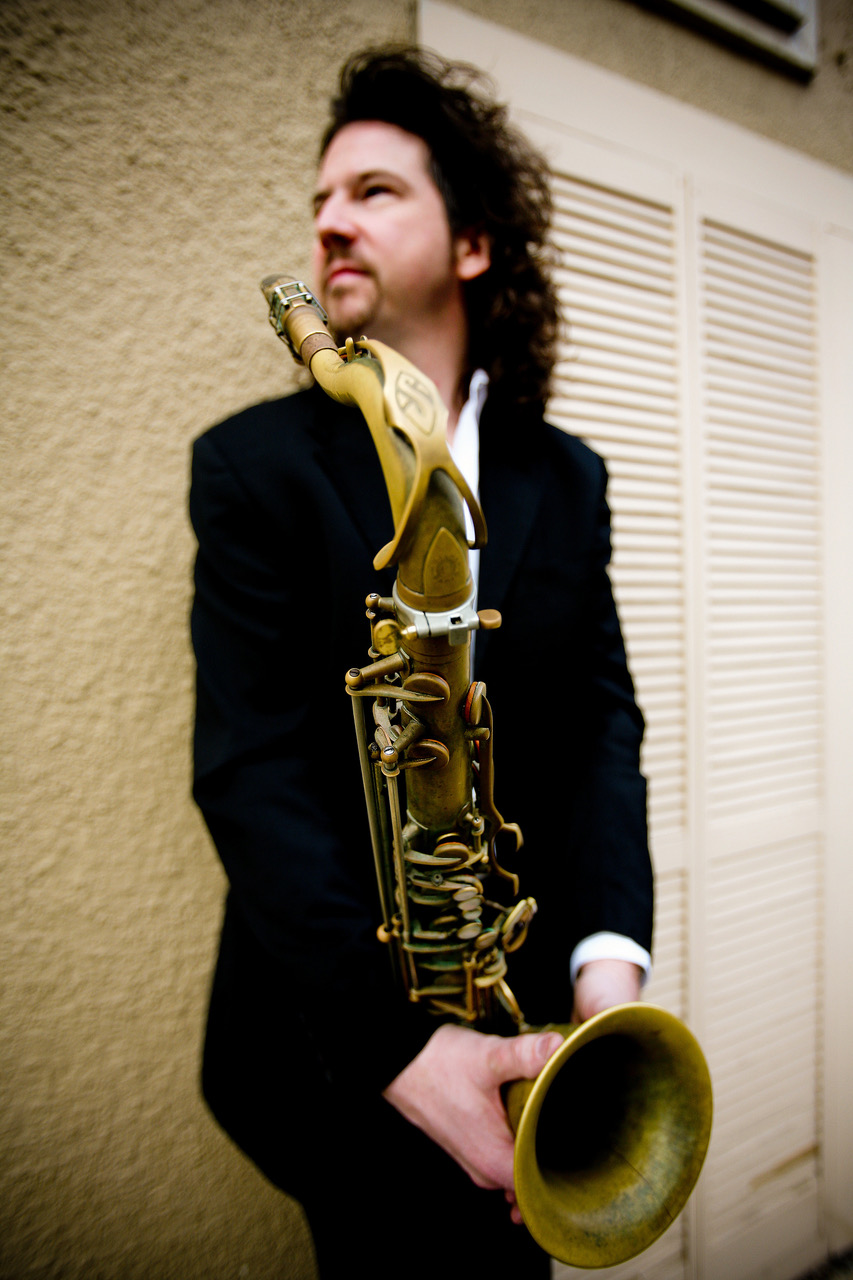 A Bit About Jeff:

Born in Edmonton, Alberta, Canada in 1965, Jeff was cold for about nine months out of the year, every year. His father, a chemistry professor, moved the family to Nigeria for a couple years during 3rd and 4th grade, and then Jeff was way too warm for a couple years. He has been endlessly searching for balance in his life ever since.

As a child, classical piano led to saxophone, and then flute and clarinet. With music, Jeff found some traction in his young life. Far from a prodigy, but still with some aptitude, he learned that clear direction and hard work was the recipe that worked well for him. Graduating high school, he knew he would be a physicist, and most likely work on the origins of the universe. Eight years later, he had a Masters degree in Jazz Performance from the University of North Texas, and knew just enough math to play songs in 12/8. The origins of the universe would sadly be left to someone else. Counting to 12 is not going to get you very far in 27 dimensional Bosonic String Theory.

Jeff has been a full time jazz musician since his late teens, and has been teaching for that same length of time. He spent years as an adjunct professor at numerous schools and universities, as well as serving as Master Teaching Artist in Jazz through the Washington Performing Arts Society. He’s played with famous people (Marcus Miller, Walt Weiskopf, Ingrid Jensen, David Foster), and done cool things (toured Siberia in January, busked with Grammy winner Jeff Coffin for gas money in Colorado Springs). If you want, he can email you a list of more of the cool people and cool things.

Here’s what really matters: Jeff loves teaching, and he really loves teaching adults. About 20 years ago, it occurred to Jeff that there were tens of thousands of driven, passionate musicians around the world who were hungry to be taken seriously, eager to play and learn and progress. During that time, Jeff founded and directed many adult education outlets for adults in the USA, including Maryland Summer Jazz, Jazz Band Masterclass, inDepth Jazz Clinics, Jazz Teacher Training and Capital City Voices. Through them, he has served well over 1,000 adult students, which is a big number for a guy only comfortable with counting to 12.

With no grand plan whatsoever, Jeff recorded his first YouTube video in late 2016, and in less than two years, we was reaching 12,000 passionate adult jazz musicians per week with his Digging Deeper Jazz videos. A little bit by accident, Jeff had discovered that the hungry adults he was connecting with on the east coast of the USA actually existed everywhere across the globe. It was shocking, inspiring, and a little sad how little guidance there was out there for these hungry musicians. Something had to be done about this.

Jazz Wire launched in late 2018, with the goal of doing for adult musicians around the globe what Jeff had spent 20 years doing for those amateurs and semi-pros in the USA. Connect them, lead them, and treat them like they are the serious musicians that they truly are. The internet has made the world smaller, and Jeff aims to make the jazz world even smaller by engaging passionate adult students, no matter their location the globe.

Jeff plays jazz regularly with several fantastic groups of his own, does guest spots with symphony orchestras, and does visiting teaching and speaking engagements around the world. He lives with his family in Annapolis, Maryland, and is still most comfortable with numbers 12 and lower.